Campaign to make all games televised to ensure access for fans

In the last few days we have picked up on the issue of many regular matching supporters no longer having full access to screened live matches while stadium capacity is limited. When fans do return the available seats will be allocated through a ballot - we'll publish details on how this will work when the Club gives us the green light. We have worked collectively with other Premier League (PL) supporter groups led by the Football Supporters Association (FSA) to make the case to the PL and to secure vital political and government support. 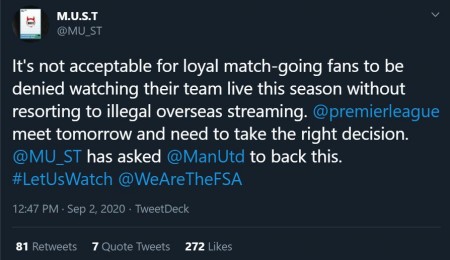 We wrote directly to the club asking for its support, citing the importance of meeting the needs of regular match-goers, some of whom have not missed matches (albeit since May only by live TV) for many years, and noting that the Football League (EFL) has agreed full broadcast access for all of their reduced capacity matches. We also highlighted the longer term risks for the League and its clubs of promoting wider sustained access through illegal streaming. We were encouraged by their immediate clear support for this position and reports suggest that there will be a positive outcome within the next week.  We hope to update members once we hear news on this.

You can read the briefing doc for the campaign here