CHEAPER TICKETS FOR MUFC YOUTH AT ARSENAL NEXT SEASON 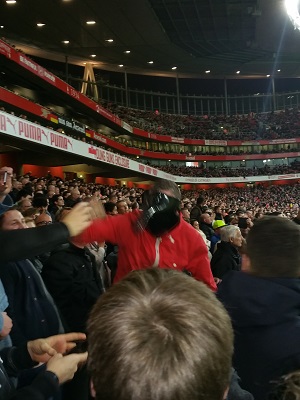 Another small but important victory won by MUST for MUFC fans - following an inquiry to Arsenal by MUST.

Prior to the recent away game at The Emirates, Duncan Drasdo contacted Arsenal to ask why 16-18 year old Manchester United fans were being charged the full adult price £64 (before MUFC away ticket rebate) while Arsenal’s own fans in the 16-18 age bracket were charged a concessionary price of £27.25.

In response Arsenal have agreed to offer the same concession to all 16-18 year old away fans from next season onwards. Arsenal’s SLO said, in a reply to Duncan "We agree encouraging young fans to attend matches is important and we will extend concessions for supporters up to 18 years old to visiting fans from the start of next season. This will ensure we are being fair to all clubs."

So thanks to MUST's intervention that's a saving of almost £40 for a crucial section of our support. It's this 16-18 age group where we tend to lose fans as the costs suddenly shoot up before they have their own source of income to cover this increase.

Fair play to Arsenal for taking swift and decisive action once it was brought to their attention and thanks to Tim Payton of Arsenal Supporters' Trust for putting us in touch with the Arsenal SLO Martin Brindle.