We’re writing again to keep you updated on where we are with the campaign to bring football back to the fans, and ultimately to transform how our club is owned and run. The end of the football season has seen no let-up in activity at all for MUST. In fact  the very opposite - we are busier than ever, so we wanted to keep you posted on everything.

Key takeaways in this email:

1. The Fans Forum meeting & the Glazers
As you know, on June 4th Joel Glazer attended the Fans Forum meeting. It was the first time in their sixteen year ownership of the club that any member of the family had had any discussion with fans' groups whatsoever, and those present made very clear how they felt about that.

In terms of the substantive discussion, to be honest it was a mix. There was no commitment from them to pay off the debt that they loaded onto the club and it is clear they intend to continue paying shareholders (with the family holding ~85%) dividends. Few United fans will either forgive or forget those abuses of our club, nor the complete lack of engagement for 15 years until forced to come out to apologise for their latest attempt to leverage more money from the now discredited Super League franchise.  But that contrition has led them to make some concessions on fan engagement and supporter share ownership that they had previously stonewalled us on. Whatever the trigger, on the face of it they are significant concessions so worth further discussion with the club to establish what they would mean in practice. Through the survey that we undertook with our Full Members recently, there was an overwhelming mandate to engage to at least explore these proposals further. We will report back on the outcome of those discussions and then consult members and wider support further. 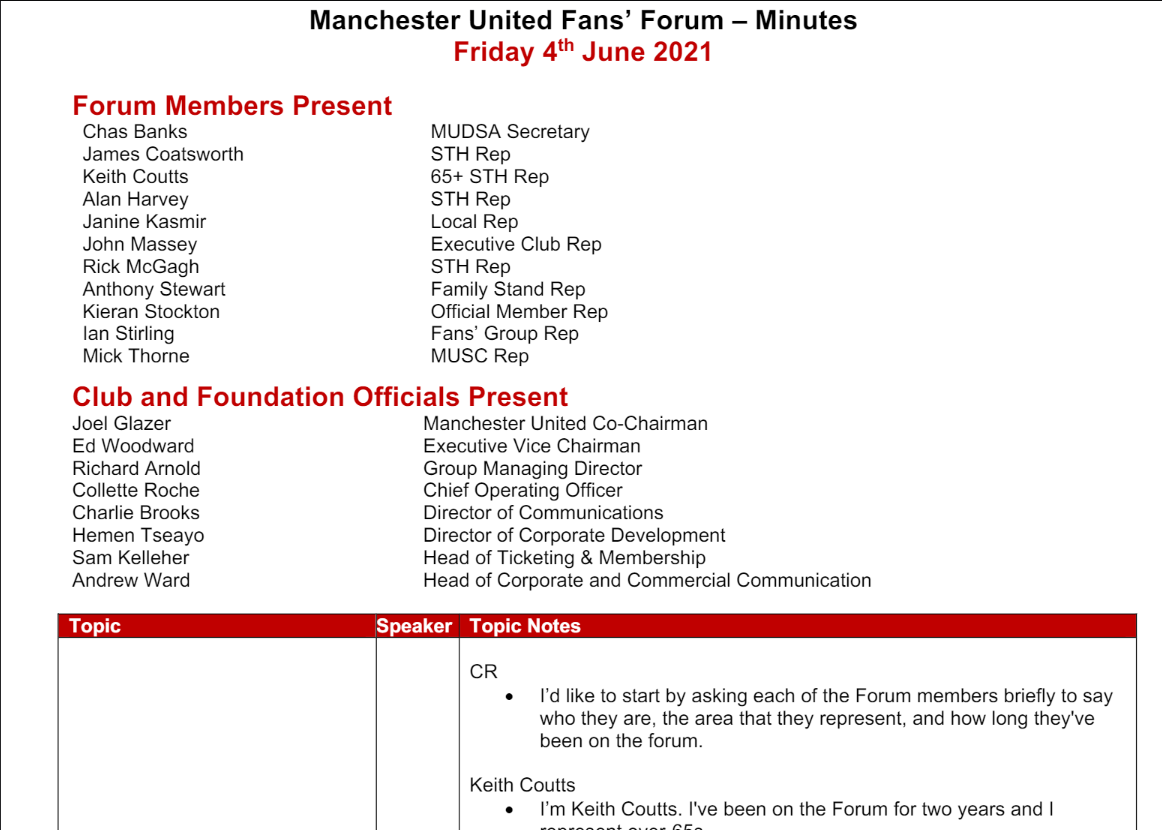 2. The Fan Share Scheme
Creating a meaningful collective fan ownership stake in United is what MUST has always existed to achieve and we have been putting that argument to the club ever since dialogue was re-established in 2013. The reason we didn’t just restart our own independent share scheme following the club being relisted on the NYSE in 2012 was the super-voting rights (10 votes per share) of the Glazer Family's B shares compared with the 1 vote per share of the publicly available A shares. When it looked like we were finally making some progress in discussions on a Fan Share Scheme at the end of 2020 those discussions hit a stalemate once again on the voting rights. We do recognise that the scale of the challenge is such that we need to engage the global fan base in this, and that this will need to happen in multiple stages with the first one aiming for a huge (7 figure) fan shareholder base with at least one share each, and then building on that platform in secondary phase. So there were 2 elements we identified as key for an initial Fan Share Scheme and these were:

1. A new class of "Fan Shares" with the same voting rights as the Glazer Family's super-voting 'B' shares

2. New issue shares so when fans buy them the funds go to the club not the Glazers or any other shareholder

There will be other issues which need to be addressed too - not least the clause giving the B shares a 67% majority on special resolutions even if they hold as few as 10% of the B shares. 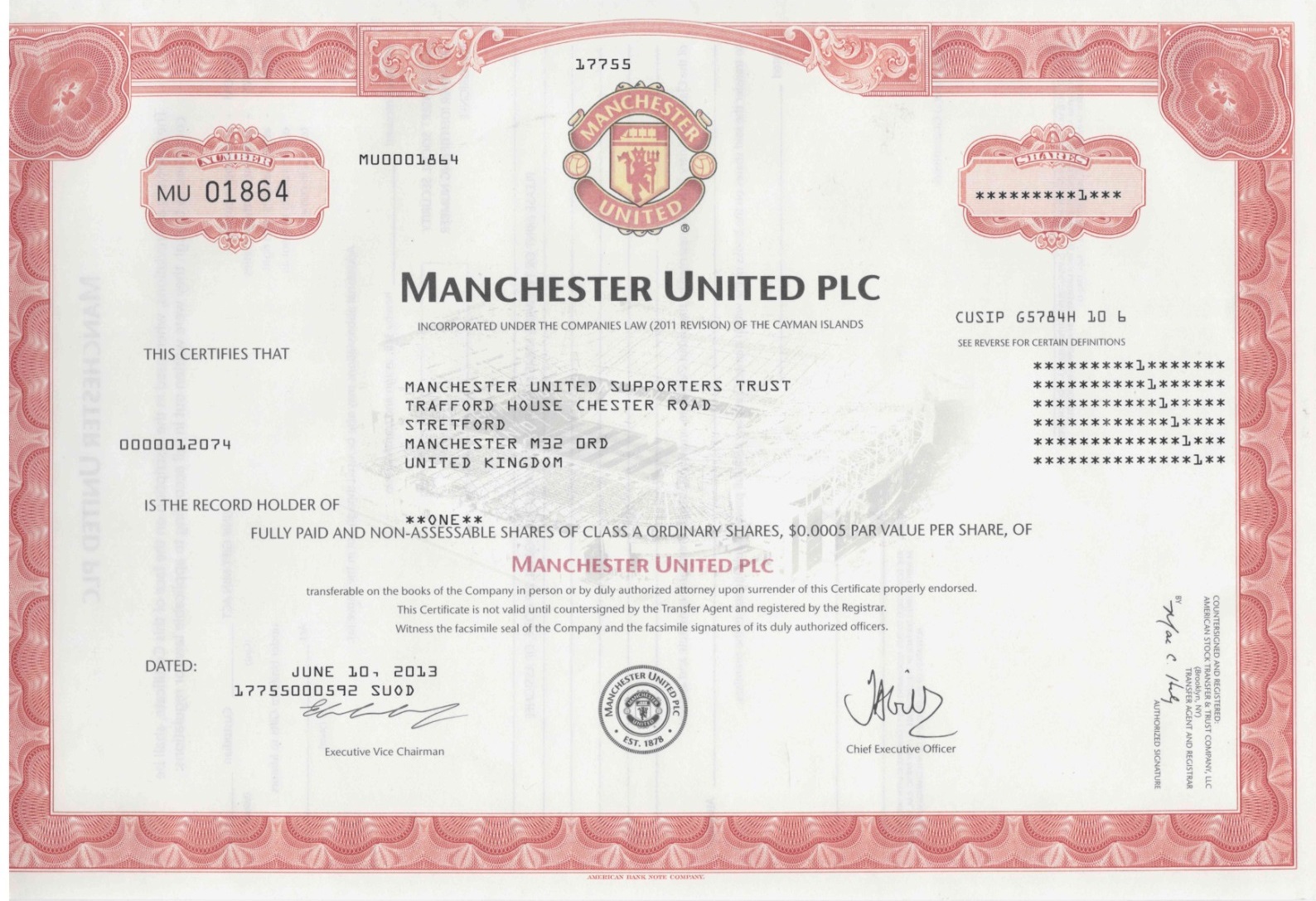 Of course we would not object to such a scheme purchasing the Glazers’ shares directly in future if that was backed by supporters and part of a change in ownership and it is our goal to get to the point where that is feasible. That clearly means we’d need to mobilise the global fan base to participate in fan share ownership if we are able to act collectively on the scale required to be meaningful. We don’t underestimate that challenge and nor do we rule out other solutions but as fans we can only deal with what is in our control. Furthermore whatever happens with ownership in the future it is obvious that if we want fans to have a powerful collective voice the only way to guarantee that is to have a major collective shareholding through mass fan participation so pursuing that goal makes sense regardless.

There was always going to be much scrutiny of the words that came from Joel Glazer on the questions around Fan Share Scheme and these were the words that stood out for us: “a new class of shares which will each carry the same voting rights as the shares owned by the Glazer family. This would establish a foundation for supporters to build a meaningful ownership stake” and “the largest fan ownership group in world sport”

So the fact that these key elements, which were a sticking point in the past, now appear to have been conceded is not insignificant but we are in no doubt this is in response to the backlash following the European Super League debacle and most importantly the threat of Government intervention backed up by the current Fan-Led Review.

Of course having been involved in this battle for Fan Share Ownership for 23 years, going back to the Murdoch attempted takeover 1998, there is no-one more sceptical than us about the intentions, or the actual reality that will be delivered, until we can see it with our own eyes. Talk is cheap and we need to see what will actually be delivered before we come back to members to consult further. For now, we need to ensure maximum pressure to deliver what has been promised which is why we’re launching the Sign For United campaign shortly (see below) to bring the influence of potential Manchester United fan shareholders drawn from the entire global fanbase.

We await further information and will keep members updated as soon as we can and we expect further consultation and a final Full Members' ballot to vote For or Against proposals. We have made clear to the club that we expect to see real progress before the start of next season, and if there isn’t they should expect to see a fresh wave of protests before the first home game, which we now know is against Leeds.
back to top

3. The Government’s “Fan-Led Review”
One of the reasons the Glazers have suddenly come forward with these offers to us is that the government has embarked on a “Fan-Led Review” of football. The owners of the big 6 clubs are undoubtedly rightly concerned that this Review will reduce their ability to make money from our clubs and are now racing to do a whole load of things they ought to have been doing anyway. 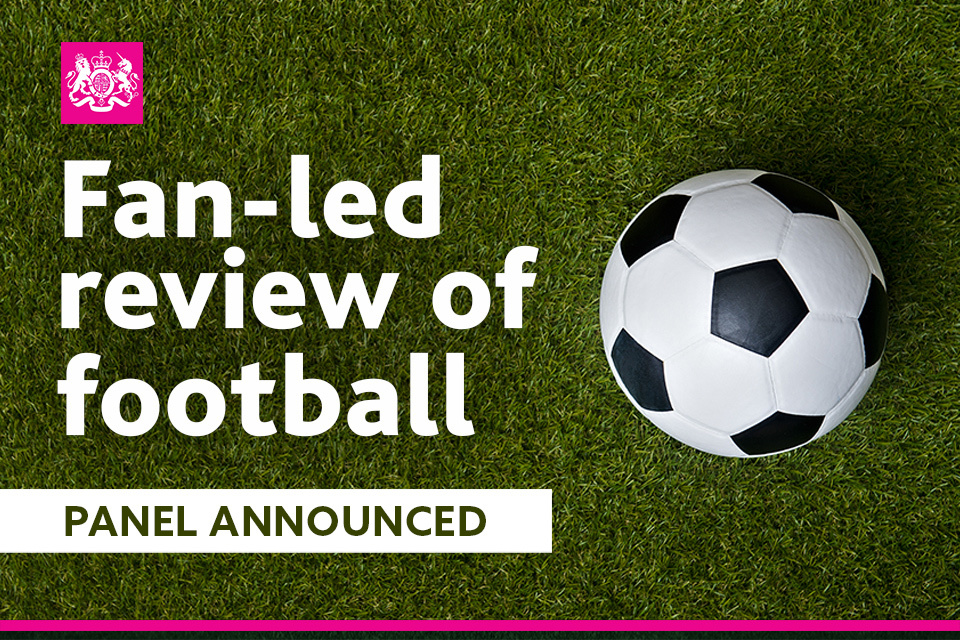 We were invited to present evidence to the Review Panel earlier this week and set out our big asks on fan share schemes, ’golden share’ powers to veto important decisions, the appointment of supporter directors, structured supporter engagement, financial and other business controls on owners and an independent regulator for football to mandate and oversee these changes.  We will say more about these proposals and the review itself shortly.

4. “Sign for United” campaign set to launch Friday 25th June
In order to get the Glazers over the line with the share scheme idea, it is essential we show them – and the rest of the world – that there is a large number of United fans who are willing to purchase shares in the club if the deal is fair. Details still need much clarification but initial financial investment need not be large for a single share. However at this stage we are just asking fans to show they want to see a meaningful Fan Share Scheme offered as the first step on a journey towards a new ownership. 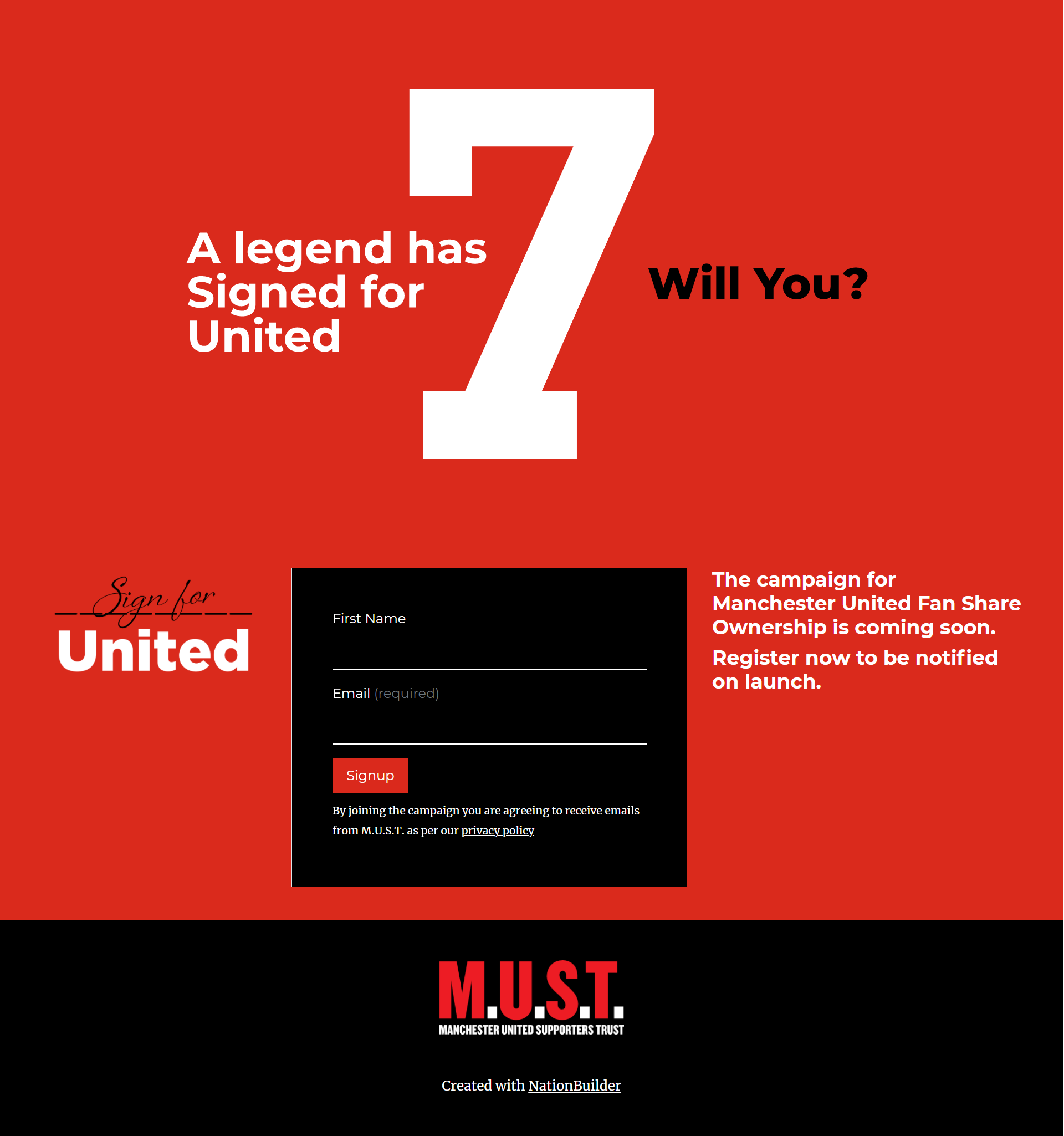 We know lots of our members owned shares before the Glazers compulsorily purchased them off us, and independent surveys suggest millions of fans globally would like to own shares - as long as those shares come with the same rights and power that Glazer-owned shares do. In order to demonstrate just how many people from our global fanbase would buy shares we will soon be launching a new campaign, “Sign for United” which invites everyone to express an interest in a share purchase. We’re not asking for a financial commitment at this stage but we do need to demonstrate that there are vast numbers of fans who want to “Sign for United” and own at least one share in their club as a first step.

The campaign is set to launch next Friday 25th June and we have some pretty cool plans for the big reveal. Please follow our brand new Twitter and Instagram accounts now.

5. Staying United
The renaissance in our campaign to change United to give fans a bigger say has been the one big positive that has come out of the disgraceful Super League plans that the ‘big 6’ clubs came out with in April. Fans have united at a whole host of clubs and we faced down the Super League and are now seeking to build on that momentum to achieve a much bigger change in our clubs and our game.

But we are only successful when we are united. A divided fans' voice is a weak fans voice and we need to stick together on this.

There will always be critics saying we should be more using different tactics (usually the exact ones we've tried year after year sice 2005) and shouldn’t even be engaging with the club in any way but based on our recent survey of Members we are confident that the majority back our balanced approach. We will be consulting wider to confirm this though and will continue to do so.

To be clear this isn't about trust it is about what is in the best interests of our club and our fans. It would be criminal not to explore what has the potential to be the biggest opportunity we've ever had to fundamentally change the club and give fans a voice we have never had before. With your support, we are going to pursue that. And if we remain united, we can get there.