We are now living in surreal times and not just the possibility of Liverpool being awarded a Premier League trophy, albeit with an asterisk attached (perhaps "leaders" or "indoor league"). Our lives are changing and our first thoughts are for our members and their families - we hope you are keeping safe and well. Also, a special shout out to any United supporters working on the front line be that in the healthcare or other essential services.

While football may be suspended MUST has continued to work on important issues including some triggered by the crisis. The aim of this bulletin is to keep you informed and offer an opportunity for feedback.


[1] The Club’s response to the Coronavirus Crisis 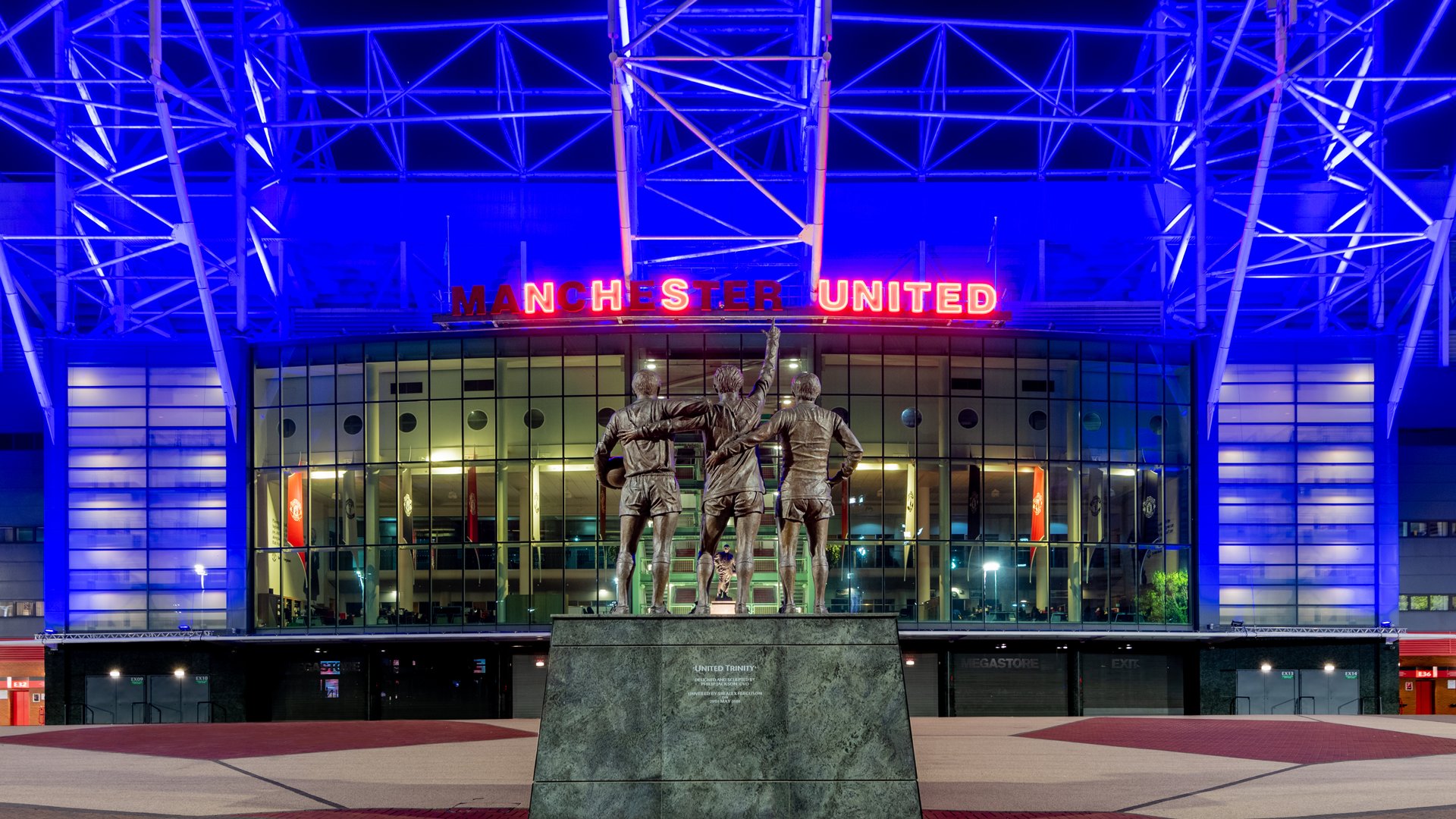 When competitions were first suspended we established an early dialogue with the club. One of the first issues that we raised was the impact on our Matchday Foodbank. We were delighted when the club responded immediately with an incredibly generous joint donation with Man City of £100,000.

Following that announcement we have seen a series of timely, and right first time, actions and commitments including paying contracted matchday workers, retaining all staff on full pay without resorting to the government furlough facility, and committing volunteer staff, MU Foundation resources and other facilities to the NHS. Our players too have been at the forefront of NHS and local community support initiatives. The club also confirmed to us that staff, including ex-player ambassadors, are calling all season ticket holders aged over 70 to ask after their welfare and address any concerns or needs they may have.

Through these community actions, and the way they are addressing the needs of season ticket holders (covered in the next item), the actions of our club have been exemplary. It has been a long time since we have seen feedback from supporters expressing how proud they are of their club, but that is the overwhelming mood and our club directors deserve to hear those plaudits.

Of course we don’t just want to see good PR from the club - we also want to see tangible actions which benefit supporters - and we are seeing some developments there - as well as movement on ownership which remains our overriding  long term objective. However it is only right to acknowledge when the Club gets things right and to give credit in particular to the communications team and to encourage more of the same. 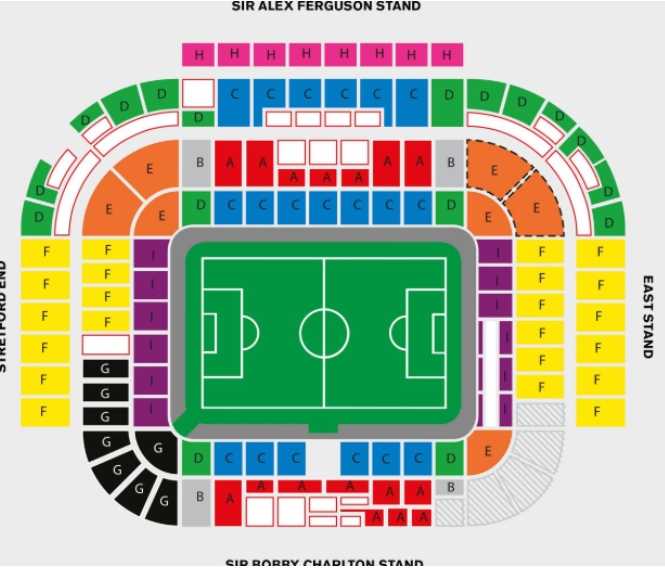 We raised supporter concerns over the ST renewal deadline and potential refunds for remaining 2019/20 matches with the club at an early stage. We also set up a survey to collect supporter concerns and were able to raise these with the Club. Supporters have since been advised of the indefinite delay to the deadline for 20/21 season ticket renewals and the commitment to refund for any matches that are canceled or played behind closed doors. It was confirmed that refunds are also applicable for the Spurs and Norwich away matches.

At a further meeting last week we discussed the range of measures that are being considered to meet the potential concerns of supporters who may not be able to retain and use their season ticket on resumption of the current season and more significantly for some or all of next season. This covers those whose personal finances have been significantly affected and older or other vulnerable supporters who might need to isolate for an extended period and those who may be unable to travel to Manchester due to travel limitations. A wide range of tailored solutions that MUST has suggested are under consideration including more flexible finance schemes, a (full or part) season ticket holiday (opt out of renewing for one season (or part thereof) and resume the following season with all rights preserved), lifting the requirement to attend some cup matches and using a ticket exchange system to pass on seats that impacted season ticket holders are unable to use.

In summary, there is a genuine commitment from the club to ensure that no season ticket holder is penalised for changes in personal circumstances related to the pandemic and we greatly welcome this. The final package of measures will depend on the emerging scenario of how this season will conclude and next season will be structured, as dictated by key decisions by government and subsequently by the football authorities. The club has committed to continuing to share and engage with MUST on those developing plans.

In providing this update we wish to offer some history and context to correct some confusion which resulted in the suggestion that MUST proposed the (compulsory) relocation of the additional Family Stand sections outside of the Stretford End proper.

To summarise while MUST did call on the Club to “Reclaim The Stretford End”  we have never supported the compulsory relocation of Season Ticket Holders without consent and furthermore, while we support the objectives, the additional expansion of the atmosphere section into the remaining Family Stand Blocks was not part of our proposal and we were not consulted on this.

The new Stretford End Right Side (SERS) that was introduced last season resulted from our MUST Open Letter on Atmosphere & Stadium Development that we published in early 2018 but credit has to go to The Red Army group for turning ideas into action. Their commitment and energy has made this happen. Our 2018 blueprint called for the whole of the lower tier, including the International Suite and the single block of the Family Stand that was in the Stretford End, to be reclaimed as an atmospheric area to be populated by a younger age profile, with safe standing when permitted by government, and mates being able to stand together. The club agreed to this in principle in late 2018 and in January 2019 confirmed the first stage to create a new 1200 seat section by shrinking the Family Stand area through natural turnover, and the Red Army (TRA) were able to take advantage of that to create the new atmosphere section. We applaud the work of all those involved in making this such a success.

At last week’s meeting, the club was able to explain the expansion of SERS which has been agreed with TRA, facilitated by a full move of the remaining Family Section to a prime area of the North (SAF) Stand. While this was not part of our proposals we understand the logic of using that area due to its low roof giving better acoustics that will of course add to the vocal atmosphere that we all want to see. We particularly welcome the news that 1000 seats in the expanded area will be given over to younger (U25) supporters at a much-reduced price of £285 per season. We hope that commitment to lower priced youth seats will expand further and we will continue to lobby for this.

In our 2018 letter we called for seat moves to be through churn or with supporter consent, while recognising that some such moves are unavoidable if the stadium configuration is to be developed and improved. We were also assured at last week’s meeting that, following further communications and briefings, most eligible Family Stand seat holders have now been satisfactorily accommodated and many, though by no means all, acknowledge that the new location will provide a better experience. Current North Stand occupants required to move are being consulted and given priority on other seats within that stand including further seats that will be released during the now delayed annual renewal process.  We hope that process can be concluded with an outcome that satisfies those supporters, who will no doubt also recognise the benefits for the development of the stadium as a whole. We are happy to offer representation for any members who are affected and unhappy with the outcome although it is important to appreciate that the Club ultimately makes these decisions so our role is primarily to draw attention to individual cases and suggest remedies where possible. Please login and contact us via our helpdesk - see [9] CONTACT US at the foot of this email


[4] Covid-19 Foodbank Fundraiser Appeal
As soon as matches were suspended our MUST foodbank coordinator, Ian Patterson, got together with his counterpart from City and they put together a joint appeal to support food banks in local communities. The needs of the 19 Foodbanks across Manchester are greater than ever as many people see their income fall massively. We asked our respective clubs for support and they have stepped in with their own major donation but we still want to enable fans to play their own part if they wish to.

To date that fans' fund has raised over £11,000. MUST is adding its own contribution by donating all profits from some signed shirt draws and this has already added over £1000 to the fund. So if you'd like to donate via a £3 ticket purchase (max 5 tickets) - you can enter the 15th MUST Prize Draw at https://www.imust.org.uk/Competition (the current foodbank fundraiser is #15 Denis Law signed shirt) and we expect to hold further such draws as long as there is support. Note we continue to run our Prize Draws for MUST as well so your support for us is also much appreciated - and good luck in the draw.

At an earlier meeting, to discuss the significant safety and other policing issues that our traveling supporters experienced in Bruges, club officials who were present in the stadium have confirmed our own observations and support the need to refer the issues to UEFA. We have now agreed to coordinate a MUFC/MUST referral that we will submit shortly, the aim of which is to learn and apply lessons rather than apply retrospective sanctions. Clearly this will not be an immediate priority for UEFA but we would hope to see a response in time for the 2020/21 UEFA club competitions (whenever they may commence!). The key point we wish to assure members of is we will not allow such behaviour and issues to go unchallenged. 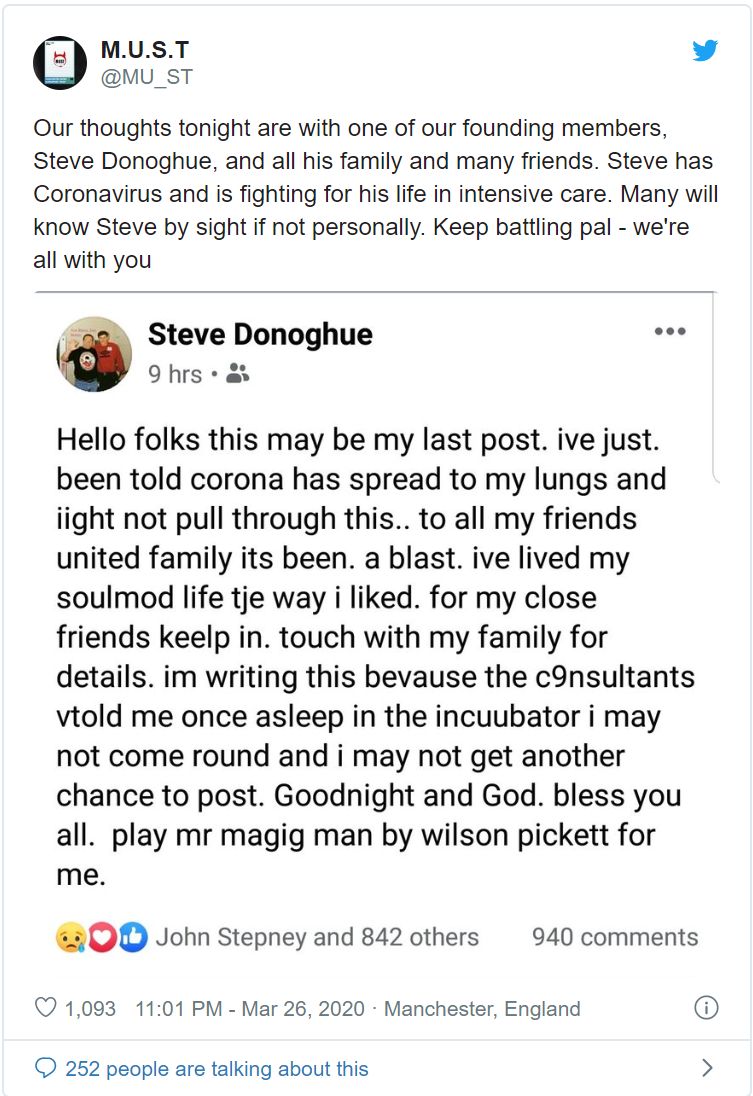 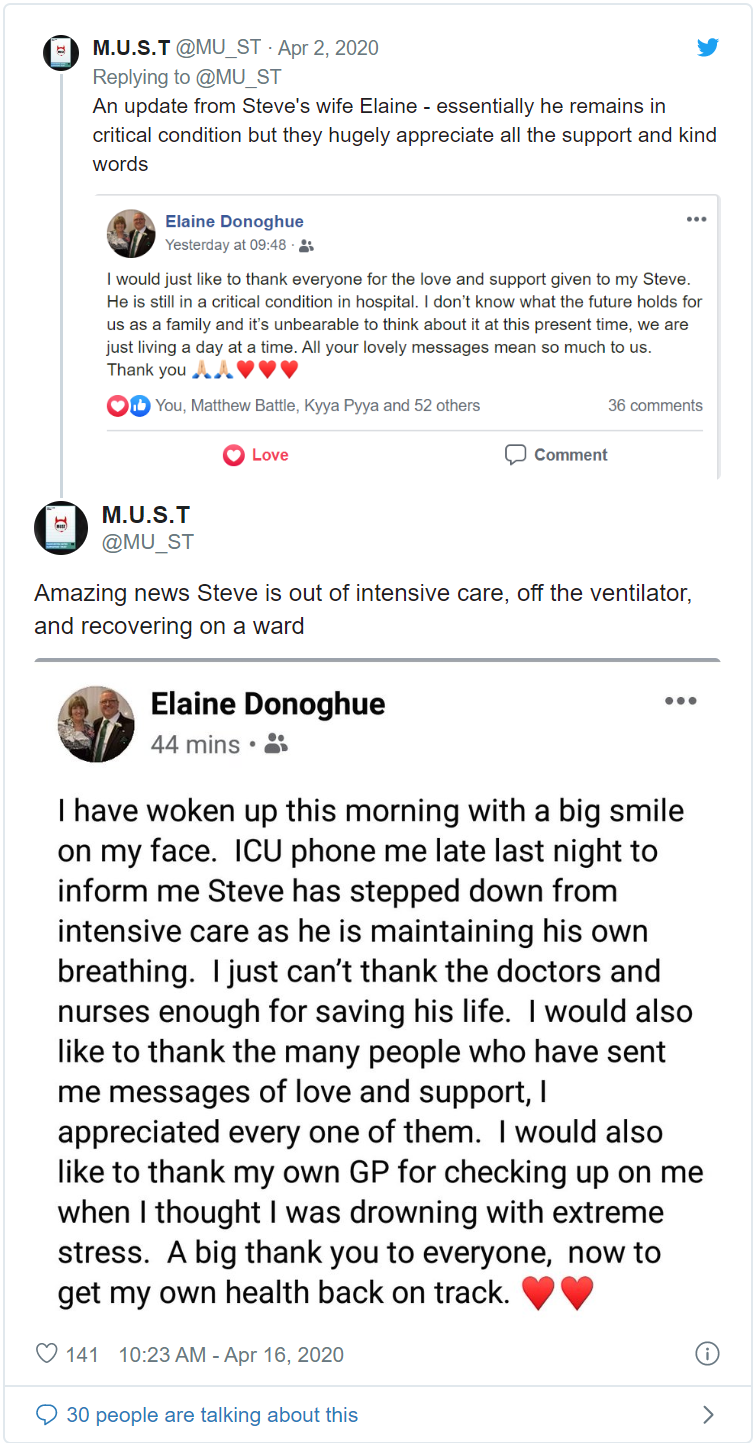 Read some of the reactions to the great news about Steve's recovery (a late comeback to make Fergie proud!) here - we hope Steve is reading this email himself now! You'll still talk to us now you're world famous won't you Steve! 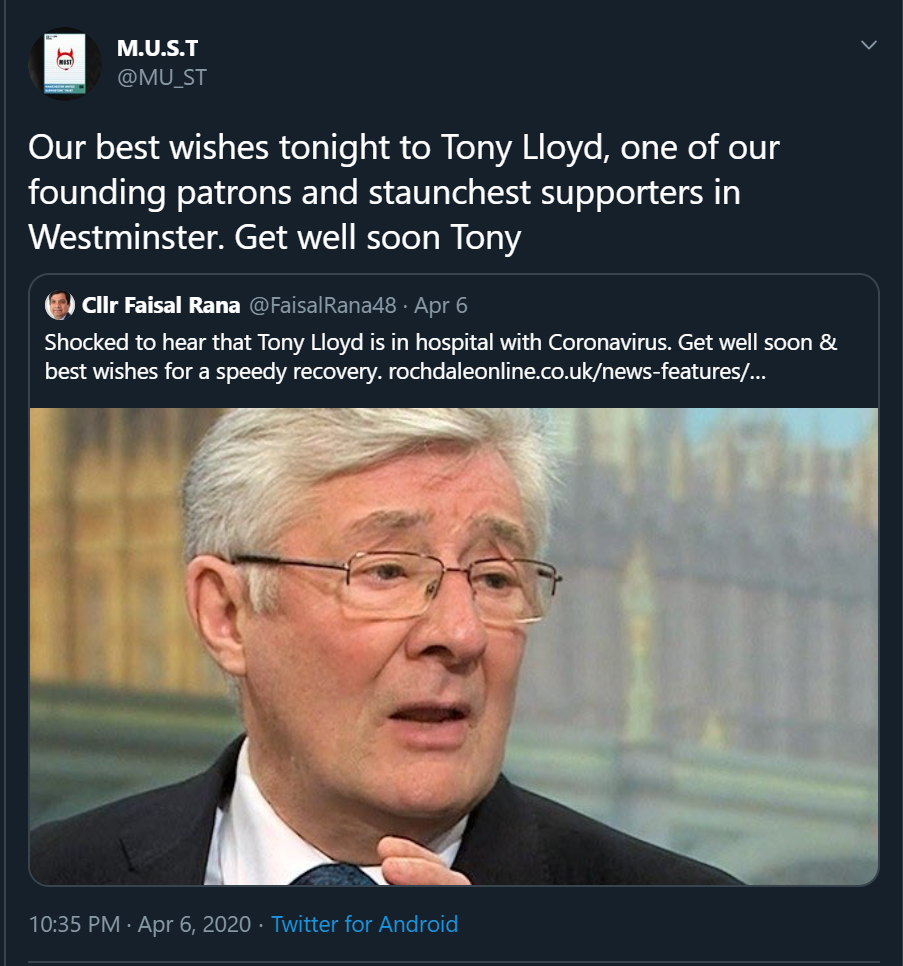 We hope that this update helps to address many of the concerns that supporters may have currently. We will be represented at the Fans Forum meeting this Friday 24th April where there will be an opportunity to raise any other questions and to pass on feedback. If you have any further comments please login and send them via our helpdesk https://www.imust.org.uk/Contact

We recommend that you reset your password regularly - you can do so by entering your membership number here: https://www.imust.org.uk/Account/ForgottenPassword

Then click on the link sent to your registered email address and you can then reset your password.

[9] CONTACT US
Please login to send us a message via our helpdesk https://www.imust.org.uk/Contact