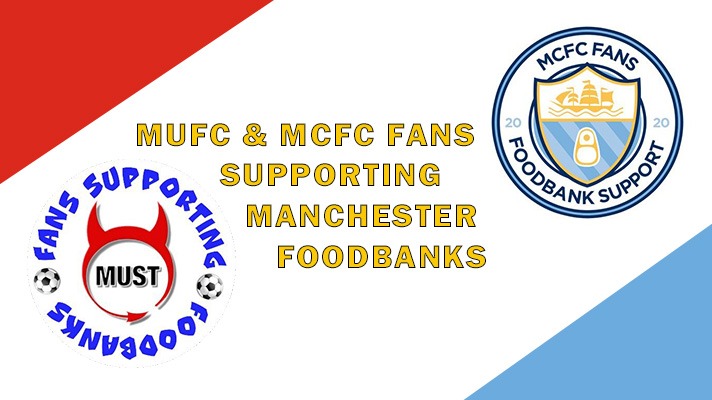 Many people in our local communities rely on foodbanks and the numbers are likely to rise steeply during the Coronavirus pandemic as untold numbers of people face losing their income for an indefinite period of time. Fans at Manchester United (through MUST) and Manchester City have been operating a matchday foodbank donation point to support this important community service.  However the current shutdown of football has effectively closed that supply source at a time when the need is greater than ever.

Our groups have therefore come together to launch a joint appeal for funds that will go to local foodbanks in Greater Manchester and will be administered by the Trussell Trust, the national charity which supports the UK foodbanks network. All of the funds raised by this appeal will be distributed across the 19 foodbanks serving the Greater Manchester area.

In addition to this Mancunian cross-club fan cooperation we’ve been overwhelmed by the generosity from our sister organisations in Merseyside with fans’ groups at Everton and Liverpool FC who, through “Fans Supporting Foodbanks”, have pledged an extraordinary £3000 towards the Manchester fund. This comes on top of other significant donations from the 1894 Group and Manchester City Official Supporters Club as well as many individual donations. In addition MUST will be donating all proceeds to the fund from their latest prize draw. You can enter the prize draw here www.imust.org.uk/Competition

A spokesperson for MUST - The Manchester United Supporters Trust, who operate the MUFC Fan’s Foodbank, said “This demonstrates an incredible solidarity which has not only bypassed the rivalry between the fans of the two great Manchester clubs but also overcome the fierce rivalry between the fans from the two great football cities of Liverpool and Manchester. In these uncertain times we urge those who can, to contribute generously to this important initiative via the online fundraising page at: https://bit.ly/Fans-Foodbanks